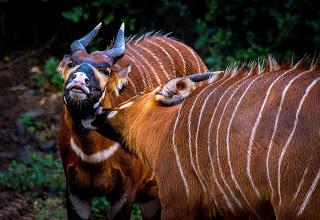 The eastern (mountain) bongo is one of the world’s most striking antelopes, but also one of the rarest. Its cinnamon coat, robust horns and vivid white stripes and facial markings, make for a remarkable package.
The subspecies is found in central Kenya living in tropical jungles with dense undergrowth up to an altitude of 4,000 meters (13,000 feet). Officially listed as Critically Endangered, the Bongo Surveillance Programme, working alongside the Kenya Wildlife Service, using a combination of photos taken at remote camera sites and analysis of DNA extracted from dung, estimates that there are as few as 140 animals remaining in the wild spread across four isolated populations. Habitat loss for agriculture, uncontrolled timber cutting and hunting for meat have all contributed to its recent decline.

Fortunately, mountain bongos breed well in captivity and several institutions in Kenya, Europe, and North America have focused on creating a sizable backup population running into hundreds of animals should it be needed. We visited the Mt. Kenya Wildlife Conservancy which has itself produced over 70 mountain bongos.
Various options have been talked about. Reestablishing wildlife corridors that would enable mountain bongos to travel between the four isolated areas they occupy is one consideration but is not very realistic. Reintroducing mountain bongos using captive stock is another possibility not just to add to the total number, but to increase the genetic diversity within the existing wild population.

One reintroduction of 18 animals have already been made. A third consideration is to address the issues that caused the decline and are continuing to exist. These are not easy problems to solve. 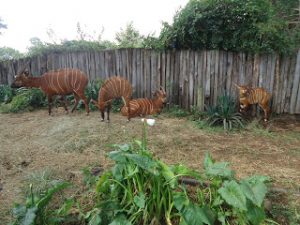 Bongos grazing at the orphanage

THE FACIAL MARKINGS ON MOUNTAIN BONGOS ARE VERY PRONOUNCED

Nature seems to be full of contradictions. While so many wild species easily blend into their environment, which makes sense from a natural selection standpoint, others are adorned with attributes that one might think would make them more vulnerable.

While it is common for the males of many species to be much more conspicuous, males being more expendable when it comes to maintaining viable populations, among bongos both males and females are strongly marked and bear horns. The level of facial detail is especially amazing. While we have a general sense how natural selection operates, our understanding as to how the process works at this level is far from clear. 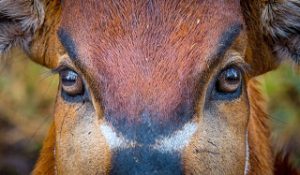 Nocturnal and partially diurnal. Bongos are extremely shy and rarely seen expect to the various night-viewing lodges in the Aberdare forest, but wait! there’s one at the Nairobi safari walk make a date this weekend as you enjoy the serene environment as you walk on the boardwalk get to see this remarkably charismatic antelope up close, or better yet visit the Mt. Kenya orphanage for a front row seat to experience their charm.

Visit the Mt. Kenya wildlife orphanage for a more personal encounter with the magnificent species