Large antelopes called hartebeests, which were formerly widespread in Africa, have over the years declined in numbers with some sub-species being declared extinct, according to the International Union for Conservation and Nature.

Hartebeest is a large African antelope, also known as Kongoni, which has eight sub-species of which one is entirely extinct while others are facing imminent danger.

Kenya is a home of Coke’s and Lewel’s hartebeests, which have cross-bred producing Jackson’s species, whose numbers are also declining. The conservation status of Coke’s hartebeest falls under least concerned and the numbers are noted to be decreasing while the Lewel hartebeest is categorized as Endangered. The numbers, according to the IUCN red list, is also in the decline for further reading about the five species of hartebeests https://en.wikipedia.org/wiki/Hartebeest

Hartebeest are medium sized horse like antelopes, whose herbivorous diet is comprised mainly of grasses. Although they are mainly found in medium tall to tall grasslands, they are more tolerant of high grass and woods than other plains antelopes. They feed entirely on grass, but not very selective and quite tolerant of poor-quality food. Hartebeests are very alert and cautious in comparison to other plains ungulates and rely primarily on their vision to spot predators.

Typically Hartebeest cows and calves exhibit high site fidelity and, individuals within each heard are identifiable based on unique natural marks, thus sight-resight, estimators can be used to qualify abundance of herds. Females occasionally form small herds of 5-12 animals and strong dominance relationships between females define the social organization for the entire herd. Mature males are solitary and territorial while adult females do not form permanent associations with other adults but keep up to four generations of their young. Young are born throughout the year, but conception and breeding peaks is influenced by the availability of food. The hartebeest female isolates herself in scrub areas to give birth and leaves the young calf hidden for a fortnight, only visiting it briefly to suckle. 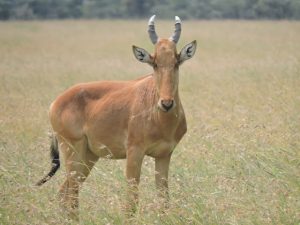 The hartebeest is one of the most sedentary antelopes (making it easy to hunt), but it does move around more when larger groupings form during the dry seasons or in periods of drought, to seek water and better grazing. At other times the females form small groups of five to 12 animals that wander around their home range. Most mature males become solitary and spread out in adjoining territories. Hartebeests go to water regularly, but in some circumstances, territorial males appear to go without drinking for rather long periods. The home ranges are usually densely populated. When a territorial male returns from watering, he may find another in his place.

Females are free to seek the best grazing in their home range, but males cannot leave their territories for long if they intend to keep them. Successful breeding only takes place within the territories-open, short-grass areas of ridges or rises on plateaus are the most favored spots. Males strenuously defend their territories; they often stand on open, elevated areas to keep a lookout for intruders. Should a territorial male be challenged, a fight may develop. Males are aggressive, especially so during breeding peaks. Like many antelopes, however, hartebeests have developed ways of fighting that determine dominance without many fatalities or serious injuries. A ritualized series of head movements and body stances, followed by depositing droppings on long-established dung piles that mark the territory’s borders, normally precede any actual clashing of horns and fighting. After the dominance ritual, one male may leave. If not, the hartebeest with its stout horns, short, strong neck, and heavily muscled shoulders, is well-prepared for fighting. If the dispute over a territory is serious and both males are prepared to fight over it, a severe injury may result.

The critically endangered category is the highest risk category assigned by the IUCN red list for the wild species. And while Jackson’s hartebeest has significant numbers and is largely found in the Mount Kenya region, with significant numbers in Laikipia, they are also found in the Ewaso region of central Kenya and Ruma National Park near Lake Victoria. The total population of Jackson’s hartebeest is unknown but in Laikipia, their numbers are estimated between 700-1000 individuals of Ol Pejeta contains an estimated 175 individuals (21%). The Laikipia population has fallen by 70% in the last 10 years. A study investigating different factors responsible for the decline, which included habitat/ Loss, competition with livestock, disease, and predation, indicated that predation was a major factor causing the decline. 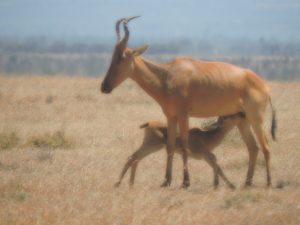 It is presumed that Jackson’s hartebeest has significant numbers, with those in Laikipia having declined by more than 80 percent in the past 15 years a situation which researches are pointing it to predation, diseases and also habitat loss.

APPRECIATING AND UNDERSTANDING OUR CRAWLING FRIENDS (OPHIDIOPHOBIA)
Scroll to top