The first time the full impact of the reality of the plight of the Northern White Rhinos was on a documentary “OL Pejeta Diaries” I was aware before on their decline but the magnitude of their extinction closing in this fast, its such a shame on humanity.

The sole threat to Rhinos is human greed! Rhino populations are facing serious threats from illegal trade, primarily poaching for ‘traditional medicine” from some far East countries, habitat loss and political conflicts, Humans have been the main driver of the population’s decline,

The first time I meet up with Sudan was during an educational field trip while in campus, I was excited and anxious to meet him but after I heard of his story from his keeper James Mwenda who know happens to be a very close friend of mine, I literally broke down, White Rhinos are social, friendly and have a charismatic charm in them that you can even pet and have a close picture with them as you pet their backs “only those in semi-captive environments and that are used to being in close contact with humans’ don’t you dare try this in the wild while on a game drive. 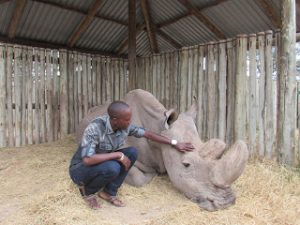 “We cannot be the generation that wipes out Rhinos”

The northern white rhinoceros, or northern square-lipped rhinoceros (Ceratotherium simum cottoni), is one of the two subspecies of the white rhinoceros. Formerly found in several countries in East and Central Africa south of the Sahara, it is listed as Critically Endangered. This subspecies is a grazer in grasslands and savanna woodlands. As of November 2015, there are only three rhinos of this subspecies left. They all belong to the Dvůr Králové Zoo in the Czech Republic but live in the Ol Pejeta Conservancy in Kenya and are protected round-the-clock by armed guards.

HOW DID WE GET HERE??

The zoo population is declining, and northern whites have rarely reproduced in captivity. There are now only three northern white rhinos left. They all belong to the Dvůr Králové Zoo in the Czech Republic but were transported to Ol Pejeta Conservancy in Kenya, Africa.They arrived at the conservancy after an air and road trip on 20 December 2009.

The three rhinos (1 male and 2 female), under constant watch by specialists and staff, lived in specially constructed bomas with access to a 400×400-metre paddock area, allowing them to acclimatize to their new surroundings.

To prevent any unnecessary injuries they might inflict on each other while interacting in their fenced area, and give their horns an opportunity to regrow to a natural shape (as their front horns had grown bent by much rubbing against enclosure bars in captivity), all three rhinos were sedated and their horns were sawn off. This also made them less vulnerable to the poaching that drove their species to near extinction, as the horn is what the poachers are after. In place of their horns, radio transmitters have been installed to allow closer monitoring of their whereabouts. They are protected round-the-clock by armed guards. Poachers have been selling their horns for $50,000 per kilo.

Since May 2010, the northern white rhino male Sudan was moved from the initial holding pens to a much larger 700-acre (2.8 km2) semi-wild enclosure. There he roams among many African animals, including several southern white rhino females and many plains animals. On 26 October 2011, the females were coaxed into the larger enclosure. Because Najin was overly protective of her daughter Fatu’s chance at mating, one of the two moved back into the smaller enclosure two weeks later.

Until 2011, the progress of this attempt at saving the northern white rhinoceros was documented on the initiative’s website; and their life in Ol Pejeta Conservancy is commented on the Conservancy’s website. Several documentaries are in the works, including an episode of Ol Pejeta Diaries entitled “Return of the African Titans” for Oasis HD Canada fall 2010, and a follow-up half-hour episode to follow. This translocation is also the subject of a BBC Last Chance to See special entitled “Return of the Rhino,“ presented by Stephen Fry and the zoologist Mark Carwardine; the TV program reported at the end that the two pairs of rhinos were “flirting.”

On 25 April 2012 and on 27 May 2012 Suni and Najin mated. Pregnancy of the female rhinos was monitored weekly. gestation period takes 16 to 18 months, so in January 2014 the Conservancy considered Najin not pregnant, and a male southern white rhino from Lewa Wildlife Conservancy was put to Najin and Fatu enclosure in Ol Pejeta to at least intercross the subspecies. To achieve this, both female northern white rhinos were separated from their male counterparts, which prevents them, for the time being, from producing a pure northern white rhino offspring. In 2015, however, a test conducted by Czech specialists revealed that neither of the females is “capable of natural reproduction”. 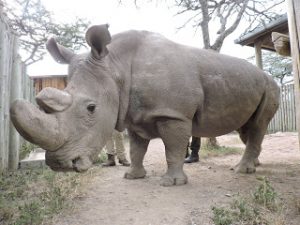 At the end of 2015, scientists from the Leibniz Institute for Zoo and Wildlife Research, San Diego Zoo Global, Tiergarten Schönbrunn and Dvůr Králové Zoo developed a plan to reproduce northern white rhinos using natural gametes of the living rhinos and induced pluripotent stem cells. Subsequently, in the future, it might be possible to specifically mature the cells into specific cells such as neurons and muscle cells, in a similar way in which Katsuhiko Hayashi has grown mice out of simple skin cells. The DNA of a dozen northern white rhinos has been preserved in genetic banks in Berlin and San Diego.

In 2017, Ol Pejeta Conservancy teamed up with Tinder to launch a fundraising campaign in order to recover this species. Therefore, they created a Tinder account for Sudan, the last standing male of northern white rhinos, and the app’s users could swipe right to make their donations for the development of breeding methods

The biological clock is ticking, as this species is at the brink of #extinction he is carrying the fate of his species. Humans are 100 percent to blame for what’s happened to the rhino populations across the planet, rhino horn is worth more than cocaine in the far East #iworry #killthetrade #killthemarket #killthedemand #rhinohorn has no medicinal value it’s made primarily of keratin same as our fingernails

Monday, March 19th, 2018- Sudan passed on at age 45 while being treated for age-related complications that led to degenerative changes in muscles and bones combined with extensive skin wounds, he was unable to stand up and was suffering a great deal the veterinary team from Dvur Kralove Zoo, Ol Pejeta and Kenya Wildlife Service made the decision to euthanize him. 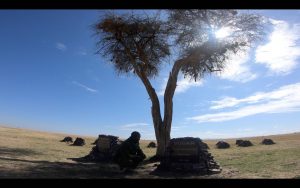 In memory of Sudan