The Ivory Bill has gained Royal Assent to become law. The Act is expected to come into force in late 2019. The end of the ivory trade in the UK removes any hiding place for the trade in illegal ivory and sends a powerful message to the world that ivory will no longer be valued as a commodity. Ivory belongs on an elephant and when the buying stops the killing will stop.

One of the world’s toughest bans on ivory sales has become law in the UK today as the Ivory Bill gained Royal Assent to become the Ivory Act 2018.

Since the Bill was introduced on 23 May 2018 it has rapidly cleared Parliamentary processes, with support from across the House. It is expected to come into force in late 2019.

The number of elephants has declined by almost a third in the last decade and around 20,000 a year are still being slaughtered due to the global demand for ivory.

It is an extraordinary achievement to have passed this Act of Parliament. The Ivory Act is a landmark in our fight to protect wildlife and the environment. The speed of its passage through Parliament shows the strength of feeling on all sides of the House on this critical issue.

The UK has shown global leadership and delivered on a key commitment in the 25 Year Environment Plan. We are determined to end this insidious trade and make sure ivory is never seen as a commodity for financial gain or a status symbol.

Once commenced, the Act will:

During October 2018, the Environment Secretary, Michael Gove launched a coalition of political leaders, conservationists and celebrities dedicated to defeating the illegal trade in ivory and establishing ivory sales bans in other countries around the globe. It is called the Ivory Alliance 2024.

I am delighted to see the UK’s domestic ivory ban is now law and to be part of the Secretary of State’s Ivory Alliance 2024, which will tackle the demand side of the severe poaching crisis we have seen in the past decade. This crucial agenda has my strong support, and I look forward to playing my part by engaging government leaders on strong legislation and enforcement.

This show of leadership from the UK comes at a crucial time for wildlife conservation internationally — and will go a long way towards influencing countries, including New Zealand and Australia, on movement towards their own bans.

Protecting wild elephants from the ravages of the bloody ivory trade requires anti-poaching; intelligence gathering; trafficking interception; deterrent sentencing; public education in market countries; and ending the trade in ivory – all ivory. The measures taken by the Westminster government to bring near-complete closure to the UK’s domestic ivory market – one of the largest in the world – are fully endorsed by the Born Free Foundation and have overwhelming support in the country. They are not only practical, workable and effective, but send a powerful signal that we no longer value the teeth of dead elephants, but champion the compassionate conservation of wild, free-living elephants and the habitats they rely on.

This is an important step towards taking action to protect our precious elephants in Africa. At the Giants Club summit in April, Gabon along with many of our African partners called on Europe to implement a ban on commercial ivory sales. I am delighted to see the UK has listened to us in Africa and has continued to be a key partner, with Gabon, in this fight against the Illegal Wildlife Trade.

Old or new ivory and its continued sale around the globe helps to fuel the illegal killing of Forest Elephants in Gabon, as it creates a demand for this commodity. We must stop it by encouraging more domestic sales bans, like the UK has introduced.

I want to congratulate the UK for showing leadership on this important issue.

The significance of Royal Assent for the Ivory Bill should not be underestimated as we continue our fight to save one of the planet’s most iconic species. Tusk has worked closely with DEFRA and Government Ministers over the last three years to introduce this legislation, for which there has always been overwhelming public support. Whilst recognising the need to include pragmatic exemptions to protect items of important historic, artistic and cultural value, this Bill sends a clear message that there is no place for the use of ivory in the 21st century.

The UK Government has once again taken a lead on tackling the trade and reducing the poaching that has decimated elephant populations over the last three decades. We sincerely hope that this move will now persuade the EU and other countries to follow suit and bolster vital efforts to halt all illegal wildlife trade.

Stopping the brutal trade in ivory is crucial to end trafficking and ensure a future for elephants. The UK government has listened and is showing decisive leadership. Now, we need China, the major destination for illegal ivory in recent years, to resolutely enforce its trade ban. It’s also equally important, for other countries on the Chinese border, to commit to closing their ivory markets.

We welcome the new Ivory Act. It represents an important milestone in the eradication of the ivory trade, a trade responsible for the poaching that threatens the very survival of elephants as a species.

The new law is exactly what African governments on the front line of the poaching crisis have been calling for.

The 19 African countries that form the Elephant Protection Initiative see this law as a breakthrough in their struggle to save their elephants.

We urge those remaining governments which continue to allow the ivory trade, including the EU, to follow the UK’s leadership and hasten the day when ivory is no longer valued as a commodity. When the buying stops, the killing will stop.

Head of Policy and Campaigns at IFAW, David Cowdrey, said:

The UK ivory ban is a momentous victory for elephant conservation. With populations being decimated by the poaching crisis at the rate of one elephant slaughtered every 26 minutes, it is vital that we close down ivory markets. The British public are strongly rejecting ivory ownership in favour of elephant protection and we are delighted that the UK Government has succeeded in putting in place one of the toughest ivory bans in the world. We hope that others will follow their lead so that in future, ivory is only valued on a live elephant.

Create narrow and carefully defined exemptions to the ban for: 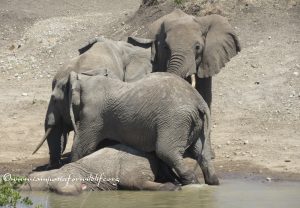 Elephants mourning one of their deceased