You are here: Home1 / kenyan 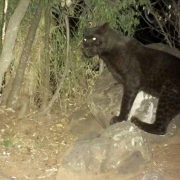 The story of a black leopard being allegedly seen in Kenya for the first time in 100 years broke out this week – but a young Samburu warrior is really the silent figure behind the discovery.

“The remote camera that I helped set up started capturing images of the black leopard from January 2018. I have many images and videos of the animal,” Letoluai Ambrose, a Research Assistant with Sandiego Zoo Global told me. He seemed perturbed by the interest that the leopard has received from all over the world since last week.

He was hired by Sandiego Zoo Global as a research assistant in a project that studied the behaviour of leopards in the Laikipia plateau. Part of this research is finding ways of mitigating the problems that leopard cause within the pastoralist communities.

During his interaction with the community, he heard about the presence of black leopards.

“At first I did not believe what they were telling me since historically we have been hearing such stories from old people,” he said.

At a later date, an elder asked him “Why don’t you capture the big black one in Lorrok area with your cameras?” He also confirmed with the owner of Lorrok ranch about the sighting.

He wrote an email to his boss and fellow scientist, Nicholas Pinfold, about the presence of the black leopard and they agreed to place trap cameras with the hope of capturing images.

The activities of the black leopard started appearing in the cameras and a paper about its presence was published here. 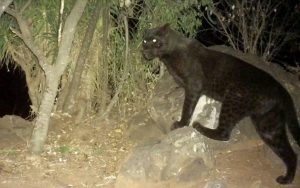 A pseudo-melanistic leopard has a normal background colour, but the spots are more densely packed than normal and merge to obscure the golden-brown background colour. Any spots on the flanks and limbs that have not merged into the mass of swirls and stripes are unusually small and discrete, rather than forming rosettes. The face and underparts are paler and dappled like those of ordinary spotted leopards.

But the leopard became famous when Letoluai was requested by the owner of Lorrok Ranch to take a British photographer Will Burrad-Lucas to see the leopard. He showed the photographer where to place his remote cameras.

“Will Burrad captured quality images but the media should not state that he found the leopard. He was only here for three days,” Letoluai mused.

Letoluai states that no individual can take credit for research findings because so many people are involved in the activity.

”Were it not for that elder, the local rangers, the landowner and the involvement of scientists from Sandiego Zoo Global, we would not have made this discovery. Everyone had a role and no one person can claim credit,” said Letoluai.

Some sections of the media have claimed that this was the first time that a black leopard has been seen in Kenya in 100 years but to the contrary, the cats have been sighted many times in different parts of Kenya.

View all posts by Naloolo Explorers

Letoluai Ambrose    Closing remarks: Black leopard sighting has attracted global attention and I believe wildlife conservation in Laikipia, Samburu and Kenya will attract the interest of many. I also believe pastoralist communities which face direct conflicts with this carnivores will be considered for benefit of conservation African leopards.
Conservation of African leopards can only be successful if Local communities will be involved in the process.
About Photographer I will be reluctant to speak about it .” He has the picture and we have the leopard at Laikipia nothing we can complain at all. Let us focus on the conservation of African leopard and understand why melanism on them at this particular area