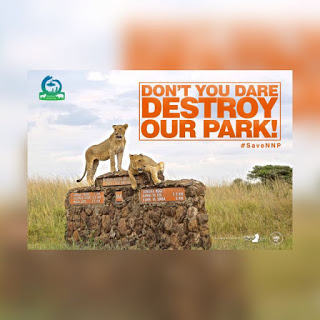 Park rules are intended to ensure that visitors enjoy a superior safari experience without endangering themselves or the wildlife. Please respect the rules

“Our lives begin to end the day we become silent about things that matter” Martin Luther King JR. The Nairobi National Park is the only park in the world adjacent to a capital city, this has its ups and downs which we are all familiar to including the standard Gauge Railway that in my opinion had so many alternative routes other than through the park, But there’s one behavior of Nairobians that I really has to be addressed alighting from the vehicles while on a game drive and sitting on top of the vehicle.

The minute you pay to enter the park you’re given a receipt and attached to it is a copy of the park rules and regulations which some people tend to overlook and only oblige when the Kenya Wildlife Service Patrols are around forgetting that they are in the wild and nothing is predictable.

I have been a member of Friends of Nairobi National Park (FONNAP)  for years and the commitment of the members who are mostly citizens who are passionate about conservation and protecting the park phenomenal, I joined this What’s App group of  FONNAP members who frequent the park and we share pictures that we take in the park and acts as an open forum to discuss any issues of concern but lately the increased numbers of visitors to the park misbehaving has become so common especially during the weekends and public holidays.

We take pictures of such sightings and report to the officers at the gate but really, is it even worth it to risk your riding on top of your vehicle while in the park, walking out to take a selfie in the wild or even sit on the vehicle’s window with you beer cans just to look cool………

Such reckless acts not only compromise the park rules but also environmental ethics.  In this scenario, the visitors may be in awe at the sighting of a Lion neglecting their behind to a camouflaged hungry Leopard. When things go south for them they start blaming the authorities asking for compensation and possibly they may go as far as asking the relevant authorities to kill the leopard that mauled their asses. The park is there solely for the reason of protecting and conserving the Leopard and generally the wildlife but after the incident people view the animal as a villain that should be elated. Thus the question every visitor to the park should ask himself before  is it worth the risk bear in mind snakes are all over you might get out for a quick snap but end up stepping on one

We seem to have watched so many survivor movies that we all want to star in one but bear in mind this is the real world once you’re into the wilderness nothing is certain, just because there’s no lion in sight doesn’t mean its safe.

Driving off-road in the park is highly prohibited, use of drones is very much illegal but still, some people think they can get away with it. Be warned its not only the KWS patrols that you should be looking out for it you fall in the category of these delinquents who think that the park is their playground FONNAP members are always in the park at any given time the gates are open so no more monkey business.

Become a friend of the park, if you see park rules being broken, Please don’t just drive by taking a minute to take to them and remind them if they don’t heed feel free to take take a photograph of the incident and share with the KWS officers at the gate. because we have a unique status among all things on the planet and morality only applies to us.

DRIVING IN THE WILDERNESS THE GLEN EDMUND WAY
Scroll to top