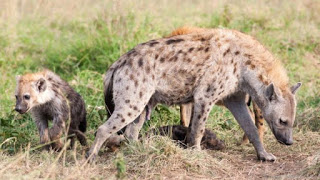 THE TRUTH ABOUT SPOTTED HYENAS

Hyenas certainly wouldn’t get far in a Miss World contest but the more I see them, the more I appreciate them. Depending on which website you read they are closer to cats than dogs, having characteristics common to both, but are actually in a family of their own; hyaenidae. Their reputation as contemptible and repulsive animals goes back thousands of years and even today this negative image is an obstacle to hyena conservation.

With their patchy fur and odd proportions, maybe they flout our shallow standards for beauty in animals. Our obsession with looks doesn’t take into account how well their bodies and brains are adapted to an ecosystem, Among Africans, hyenas arouse humor and horror the former because the genitals of the females inexplicably mimic those of males, giving rise to the myth that hyenas are hermaphrodites, and the latter because of a link with death. The Maasai back in the days used to leave corpses in the bush for hyenas to dispose of. Indeed, hyenas eat almost anything, which makes them valuable.

After a big meal big meaning not a few steaks, but 30 to 40 pounds (14 to 18 kilograms) of meat, nearly a third of their weight and far more, proportionally, than a lion would eat digestion raises hyena body temperature. On such occasions, few things are more pleasant than a cool, postprandial mud bath. But even in the mud, the hierarchy rules.

Spotted hyenas are the most efficient utilisers of carcasses of any predator, being able to digest flesh, skin and bone completely. As a result they tend to be the most numerous large predator in natural African ecosystems, and the large numbers which congregate at any kill or carcass compete fiercely for food.

The strongest and most aggressive eat their fill, while weaker individuals get less or nothing. Cubs obviously cannot compete at carcasses and so they are suckled until about a year old and sometimes longer (which also may be why fewer hyena cubs die of starvation than those of other co-operative hunters like lions and wolves), but to produce enough milk to feed them the mothers have to be strong enough and aggressive enough to compete successfully with other adults at kills.

This system favors the most aggressive animals, and pregnant spotted hyenas produce and pass on to their foetuses very high quantities of and rogens (male hormones) which raise animal aggression levels, but they also cause even females to develop male genitalia. Competition between spotted hyenas starts literally from birth; they are born precocial with well-developed teeth, and they start fighting in the den within minutes to establish dominance.

This long-established and persistent myth arose because female spotted hyenas (Crocuta crocuta) have what are to all appearances male genitalia. It is nevertheless a myth: males cannot conceive or give birth to young, and females cannot sire them.

This is lucky for the males as it gives the females a reason to tolerate their presence. They aren’t needed for protection or even really for hunting, as females are bigger and more aggressive than males, have equally high testosterone levels, and are dominant over them in any social situation.

Males wishing to mate with females approach with great caution and spend a long time essentially begging to be accepted, during sexual intercourse this organ is flaccid but the males still has to insert his penis into the clitoris.

The females’ “penis” is, in fact, an enlarged, erectile clitoris the same size, shape, and position as the male’s penis through which they urinate, mate and give birth, and in place of a vagina, they have a scrotum-like pouch.

Internally, however, they have standard mammalian female plumbing with ovaries and a uterus, but the urogenital tract instead of exiting under the tail does a U-turn in the pelvis and passes through the tubular clitoris.

This is where the females pay their dues for their status; at birth, the cubs have to pass about 60cm (the umbilical cord is only about 12cm long) through this tube, which is a first-time mother is much too tight for them to fit through and tears in the process. This is exacerbated by the fact that the cubs are born after an unusually long gestation period by predator standards and are correspondingly large and well-developed.

First-time birthing is a painful and dangerous experience for mother and offspring alike and there is a high mortality rate. The torn clitoris doesn’t heal closed afterward so subsequent births are easier and less dangerous, and the torn parts will appear pink which is one way for the observer to tell the gender of mature adults. 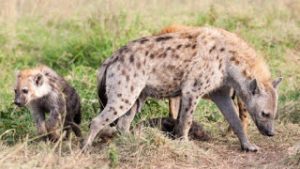 The picture above shows the adult female hyena on the right with an erect pseudo penis trough which they urinate, copulate and give birth, its the only female mammal that has no external vaginal opening, so unique in fact, that for centuries people assumed that the spotted hyena had to be a hermaphrodite