The month of December this year is packed with wonderful astronomical events to look up to.

The most notable and certainly my favourite is the Geminids meteor shower which is famous for its bright multicoloured meteors. It also produces the most meteors an hour! Last years show was absolutely fantastic. It lit up the night sky. My stargazing journal reminds me that I began watching the ‘show’ at 11.20 pm right till 3.35 am! Wow (the only time I’ll stay up for sure). The best part of all this? I observed over 60 meteors! And this year, I hope to surpass that number. 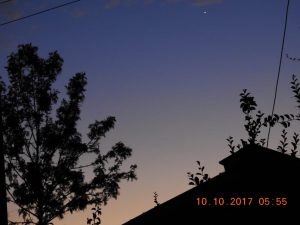 Photo was taken with Nikon P900

A weekends stargazing session at Rukinga Wildlife Sanctuary offered plenty of stars and planets to see, of course, the night sky is dark with almost zero light pollution. The most prominent constellation was Scorpius the Scorpion. It is home to many deep sky objects such as the Butterfly Cluster. A cluster is a group of stars or galaxies that appear near each other.

And bright stars like Antares (Alpha Scorpii). This is a red supergiant that is about 500 light years away.

A light year is the distance light travels in one year which is roughly 9.5 trillion Km.

Scorpius covers a very rich and varied part of the night sky and when you gaze upon this constellation and its ‘neighbours’, you are looking toward the centre of our Milky Way.  The actual core lies behind dark clouds of interstellar dust. But between us and the core lie thousands of stars and nebulas that adorn the entire region.

A question raised during our interactive stargazing night was, “how can we tell the difference between a star and a planet?”

well for a start and one of the easiest ways to distinguish between stars and planets in the night sky is by looking to see if the object twinkles or shimmers.  If indeed the object twinkles then it is most likely a star. Planets remain constant in their brightness. 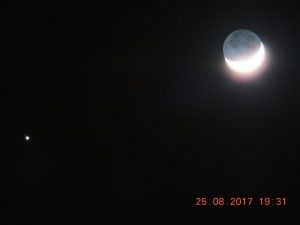 Here we see our Moon & Jupiter (left) with four of its Moon’s; Lo, Europa, Ganymede, Callisto

Note whether the object rises or sets. If the celestial object appears to move in a more or less straight line across the night sky (similar to the sun & moon) then it is most likely a Planet as they rise in the East and set in the West. Stars on the other end, orbit in a circular pattern around the North Star. They do not rise or set.

Compare their brightness. Planets typically appear much brighter than stars as they reflect the suns light. Stars emit their own light.

If you are still unable to tell the difference,

Identify the ecliptic. Planets are usually found along an imaginary belt across the night sky. Note the location and trajectory of the sun and moon in the sky. 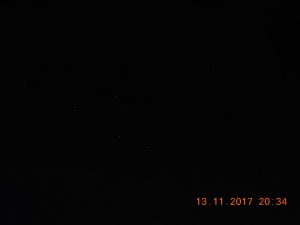 A cluster of stars (Photo taken with Nikon P900)

WHAT TO LOOK UP FOR

Dec 13-14– Geminids meteor shower. This is the king of meteor showers. Producing up to 120 bright meteors an hour.

Dec 15—Mercury at Greatest western elongation. This is the best time to view mercury as it will at its highest point above the horizon in the morning sky.

Dec 21-22– Ursids meteor shower. This shower produces up to 10 meteors an hour.

Dec 22 — full Moon. The moon will be located on the opposite side of the earth and its face will be fully illuminated. 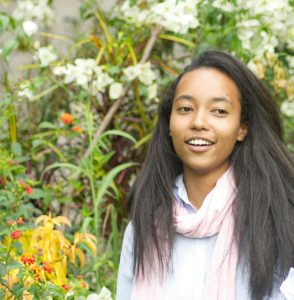 Annamarie is very enthusiastic about the cosmos and all its fascinating & mysterious aspects.  She spends most of her time, including those cold but clear nights plotting constellations. 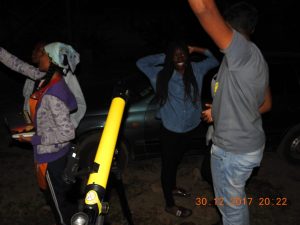 Annamarie stargazing with friends. In between is her 50mm Telescope.

A JOURNEY TO KENYA’S MOST REMOTE REGION