Blog - Latest News
You are here: Home1 / Advocacy2 / WALKING THE TALK TO SAVE RHINOS

ARTFAMCDK( Artfam Creative Designs Kenya) is an organization with a mission to advocate for the conservation of wildlife through campaign walks; wildlife artworks; creating awareness & educating both local and international communities about the urgent need to save wildlife from extinction especially the functionally extinct Northern White Rhinos. 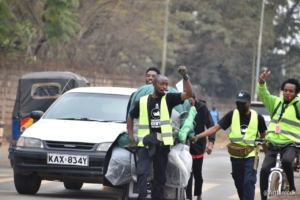 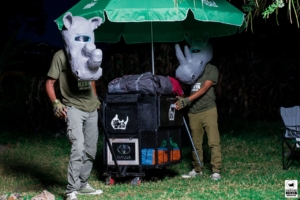 The duo Artfam conservationists (Kennedy Thuku and Kelvin Gathera are cousins and grew up in  Nyeri in an extended family where they value animals. Our family had pets(dogs and cats) and the love for animals was instilled in us since early age, I caught up with them to understand their drive and motivation to leave their comfort and dare to walk for over 200kms to create awareness about the plight of the Northern white Rhinos. 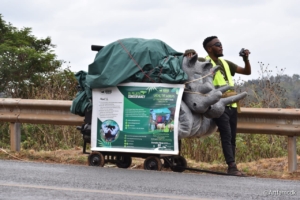 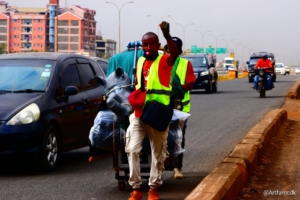 Where did the idea come from?

We came up with the idea for the campaign walk in July, 2020 after realizing most people don’t know the plight of the northern white rhinos and where they live in Kenya. We started working on the Rhino trolley Cart and camping gears in the same month until 30th August 2021 when we launched our very first campaign walk. 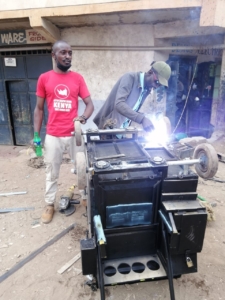 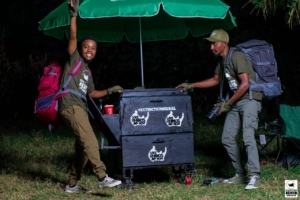 To us, saving the Northern White rhinos is a calling, mission and vision, that’s our greatest motivation. We believe it’s our responsibility to protect and preserve our these endangered species for their own sake and that of our future generations. 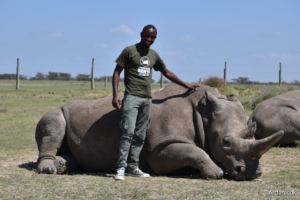 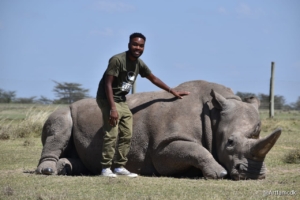 It is easier to create an online awareness campaigns, why did you prefer walking?

There are now just two northern white rhinoceros remaining in the world. Najin (born July 11th,1989)  mother to Fatu born on 29th June,2000 (both female) live under constant protection from poachers in Kenya’s Ol Pejeta Conservancy. Sudan (the last remaining male) died on March 19th 2018, effectively rendering the entire subspecies extinct. The northern white rhino was once abundant across Central Africa but staggering rates of illegal hunting/poaching for its horn have already led to its (almost certain) extinction in the wild. 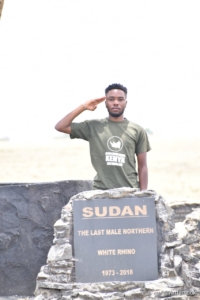 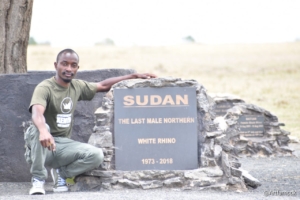 Rhino experts are now exploring the possibility of artificial reproduction technologies, using in vitro fertilisation and southern white rhino surrogates as a way to preserve and maintain northern white rhino genes into the future. Could this subspecies be brought back from extinction? The future is uncertain and it is a race against time.

Fatu(21 years), daughter of 32-years-old Najin, is now the only donor left in programme aiming to implant artificially developed embryos into another more abundant rhino species. Scientists hope to implant embryos made from the rhinos’ egg cells and frozen sperm from deceased males into surrogate mothers. 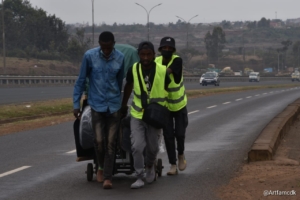 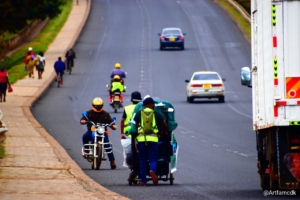 The last campaign walk had a great impact in our lives, interacting with people from different tribes and counties. The support they gave us eg. food and water, secure places to camp overnight. The most challenging part of the journey was walking at least 15kms per day without any clue of where to camp but God provided for us 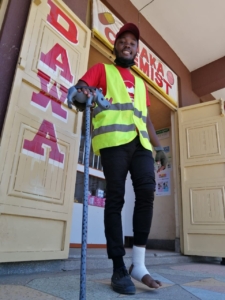 Kelvin’s left foot had a fracture when he was a kid and would swell sometimes. We visited a hospital and the doctor recommended him to take a break from the walk at least for one week.

Walking for 15kms in a day, pushing and pulling a Trolley Cart is quite hard and challenging. We had to rest after every 3 kms. The longest journey we walked in a day was for 27kms from Kiganjo/Chaka to Naromoru.

This year in August-September 2022, Artfamcdk is planning to walk for 320.9(199miles) from NAIROBI-NAKURU-NANYUKI(OL PEJETA CONSERVANCY) creating awareness on the plight of northern white rhinos and wildlife conservation at large. 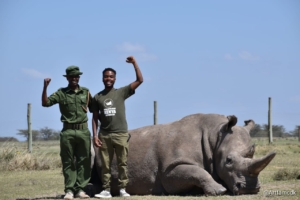 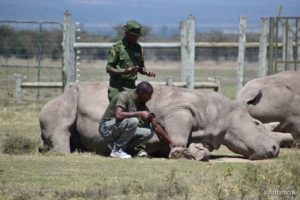 Artfamcdk’s campaign walks are funded by donations and partially by proceeds made from selling wildlife artworks. There is a lot that the team requires for these walks:- meals, camping tents and camping gears, walking kits, health insurance, photography equipment’s, communication devices etc.

Please help us secure the future of Northern white Rhinos by DONATING to this great cause. Your support will be highly appreciated.