You are here: Home1 / Cannibal 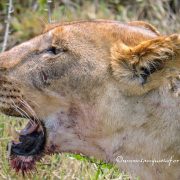 Cannibalism in Lions is often displayed when a male lion takes over dormancy and territory of a rival pride, often kills any existing cubs fathered by other males; which brings the lionesses into heat more quickly, enabling the invading to sire his own young.

But my encounter with Sior a lioness of the Schora pride at the Ol Pejeta conservancy feeding on the carcass of a freshly killed lioness by her pride at night made me draw a sharp breath of shock.

I have always known lions as scavengers which happily steal food from other animals, or eat leftovers after a kill, often seen them bullying other predators into giving up their meals. but as you can see in the clip above Sior nibbles away the remains menacingly.

According to Wikipedia Cannibalism involves consuming all or part of another individual of the same species as food. To consume the same species, or show cannibalistic behaviour, is a common ecological interaction in the animal kingdom, and has been recorded in more than 1,500 species so it shouldn’t be such a dillema, here’s the real catch I have witnessed lions killing hyenas but never have I seen the lion eating the hyena, wild me in lets keep the conversation flowing

In your opinion, Why do you think Sior fed on the dead lioness?