The African lion, an iconic symbol of strength, is one of the latest additions to the growing list of animals threatened with extinction. The first time you see one up close there’s this thrilling feeling that you get “I can’t be the only one who gets it” its fear, it’s exciting but most of it fun. 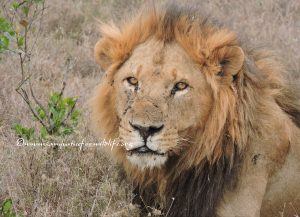 The love and affection that Kenyans have for this magnificent species was best portrayed after the controversial shooting of the stray lion “Mohawk” from the Nairobi National Park some years back, but the plight of this species has reached an alarming rate and thus needs to be acted upon by relevant bodies be it the Kenya Wildlife Service or Non governmental Organizations that play a crucial role in the immense research and monitoring of the species the dynamics revolving around their declining numbers and solving their conflicts with livestock herders in terms of compensations to avoid them being killed in retaliation. 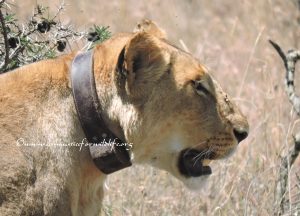 Lion numbers have been quickly declining in East and West Africa, forcing the International Union for Conservation of Nature (IUCN) to classify the “king of the jungle” as Vulnerable on its updated Red List of Threatened Species. decline in lion population is attributed to factors e.g. habitat loss, diseases and human-wildlife conflict. A rapid decline has been recorded in East Africa a stronghold for lions mainly due to human-lion conflict. This includes poaching and retaliatory killing.
Statistics reveal that the national population of lions in Kenya is reduced by an average of 100 lions each year! To come up with solutions aimed at mitigating the human-lion conflict, conservationists monitor lion movements through collars. 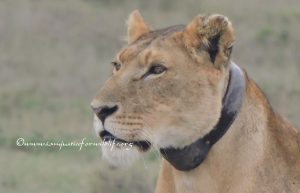 Radio collars assist the Ecological Monitoring Department to obtain data on predator-prey interactions, population status and structure, movement patterns and social organization. Through the use of collars, prey mortality caused by predators can be analyzed to show their impacts on prey species. Too many lions, for example, can be a problem because high prey off-takes can lead to a serious decline of endangered and other species of concern to the Ol Pejeta Conservancy, including Jackson’s hartebeest, Grevy’s zebra, black rhinos, Beisa Oryx and ostriches. Without collars, the same data can be collected but collars allow closer monitoring on a more regular basis. 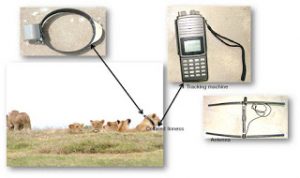 Currently, several prides of the conservancy’s lions are equipped with GPS radio collars, which are linked to GSM (Global System for Mobile communication technology) tracking devices. The collars allow for the development of home range maps and offer a greater understanding of the habits and movements of this species (only a female lion is collared because they stick to the pride). They also allow the conservancy staff to maintain the balance of wildlife on the conservancy by observing the impact of the lion upon such prey species as hartebeest, whose population had fallen by 50% over the last ten years, largely as a result of lion activity. This information is also useful in other research activities such as “kill search” that use the GPS fixes from the collard prides to locate the potential kills.
Lions from an ecological perspective are crucial for a balanced and resilient system. Therefore monitoring lions is crucial to understand their movement and general predator-prey interaction, the main purposes for the activity are; to monitor the movement and build up a photographic means of identifying lions for further research, Monitor individual pride to understand their morphological features, Monitor prides to understand their habitat utilization and home ranges and to Identify lion prey composition

YOU CAN ALSO TAKE PART IN LION TRACKING
To help sensitize the importance of lion tracking visitors to the conservancy can take part in a two hour lion tracking at a cost of only 40 USD for two hours you will be picked from the gate, or from your accommodation facility if you are already at the conservancy by the conservancy’s highly trained and skilled lion trackers  modern  land cruisers with high chances of spotting lions 80% chance, this will give you adequate access to the lion pride you will be tracking and in a nutshell this is what you will be engaged in Starting by feeding\ coding lion frequency into radio telemetry receiver (each collared lioness has a different collar frequency number same as our different phone sim number), drive along lion’s home ranges and wait for beep signal (Beep…Beep… beep). Once there is a beep signal, the radio telemetry receiver is connected to a hand-held two-way antenna which gives the specific direction of the lion being tracked the closer you get to the lion the higher the beep. On sighting a pride, GPS data is first downloaded at a distance where the lions feel safe.
Thereafter you will help collect the following attributes which will be recorded; Date, Time, Pride ID, Location, Type of Habitat, Vehicle GPS Point (UTM Zone 37N, WGS 1984), Photo number to be identified later, Total number of individuals, Number of different individuals of similar sex and age, Activity, (If on a kill, the species of the prey) and (If on a kill, the approximate age of the kill in days)
This information will be recorded in shorthand in the field, later it will be collated into a Microsoft Excel Spreadsheet. In the spreadsheet, the names of the individual lions will be also added once they had been identified from their photographs. The different group’s movements and ranges around the Conservancy will be mapped using Arc Map 10.2

Individual Identification of Lions Using Whisker Spot Pattern
Identification based on individual variation in the pattern of spots marking the position of the vibrissae between the upper lip and the nose.