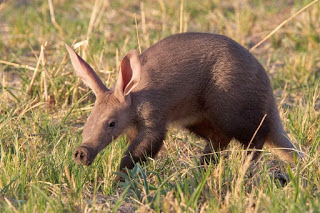 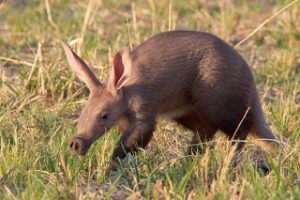 or conservationist if you have come across this peculiar animal count yourself in lucky to be in a very short list of people who have had this rare opportunity to see this magnificent animal.
Apparently, its Swahili name is “Mhanga” I’ve got no clue what relevance it has to the Swahili saying “Kujitolea mhanga” if you have the slightest clue please enlighten us by posting after you complete reading.
Strangely these shy animals live throughout Africa, south of the Sahara. Their name comes from South Africa’s Afrikaans language and means “earth pig.” A glimpse of the aardvark’s body and long snout brings the pig to mind. On closer inspection, the aardvark appears to include other animal features as well. It boasts rabbitlike ears and a kangaroo tail yet the aardvark is related to none of these animals.

Aardvarks are nocturnal. They spend the hot African afternoon holed up in cool underground burrows dug with their powerful feet and claws that resemble small spades. After sunset, aardvarks put those claws to good use in acquiring their favorite food termites. (I guess you have know figured out why you probably have never come across one)
While foraging in grasslands and forests aardvarks, also called “antbears,” may travel several miles a night in search 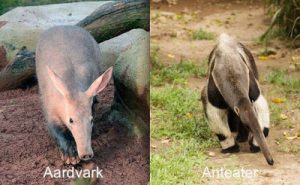 of large, earthen termite mounds. A hungry aardvark digs through the hard shell of a promising mound with its front claws and uses its long, sticky, wormlike tongue to feast on the insects within. It can close its nostrils to keep dust and insects from invading its snout, and its thick skin protects it from bites. It uses a similar technique to raid underground ant nests.
If you ever wander off during a game drive a hit an Aardvark hole my friend I bet you will never ever drive off-road, some of their burrows are extensively deep Hyenas are so fond of them as their bungalows because of their various compartments